On Sunday Mandy, Adam and I went to the Mid-South Fair. We had a good time, though we didn't realize that on wristband day they don't sell individual ride tickets. We were a little bummed, but I don't think Adam was too heartbroken. After all, he got to ride a pony. 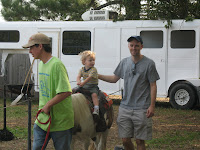 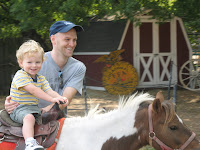 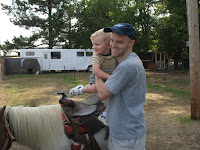 And Mandy and I were ok with this as well, because we got to try a deep fried Snickers for the first time. When I first heard about the deep friend Twinkies, Oreos, and Snickers I thought it was a little redneck for the boy who had just moved from California. But I have since repented (maybe not of the Twinkie - I still think that's very odd), and decided that as an act of my repentance I should try one. It was quite good. Sorry, no picture of that.

On the flip side, I'm sure glad the Mid-South Fair is over, and I really hope the rumors are true that it doesn't come back. Our side of Cooper-Young gets a little crazy during the Fair. There were quite a few times when I had no parking; my car alarm went off a few times because of the speakers in passing cars; and then there's the trash. I know I'm complaining, but that's ok, because last night a few of us picked up a lot of the trash. My biggest frustration came Monday morning, when I realized that someone had turned on my water hose the night before. I'm sure whoever did had a great reason for doing that.