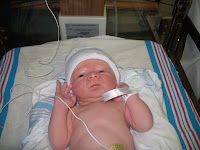 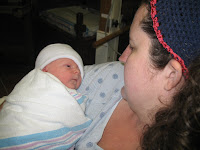 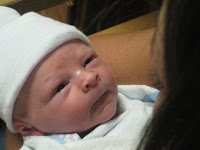 Yesterday ended up being a little crazier than we would have liked, but I'm happy to say that we now have a beautiful baby boy. Micah was born yesterday at 5:38. He weighed 6 lbs 8 oz and was 20.5 inches long.

As the day wore on, Mandy's contractions were getting stronger, but the dilation was very slow. That, coupled with the fact that Micah's heart rate was occasionally spiking, caused the doctor to want to perform a c-section. Mandy's doctor was not there, so we didn't really have a choice, though we wondered if she would have done the same thing.

The bad news about all of that is that the surgery was pretty rough on Mandy, though once again she was such a trooper. It also means a longer road to recovery. The good news is that we had Micah a lot sooner than we would have had she continued laboring, and he was very healthy! Almost all of his family got to see him soon after his birth as well. Even Adam was there when it happened. 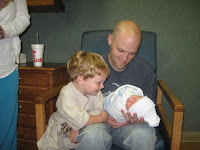