Why I Am Hopeful

A few days ago I shared some of my thoughts about the economic crisis. This morning I read an article by Andy Crouch that does a much better job at expressing my feelings that I could ever do. I recently read his book Culture Making, which I highly recommend. Here is an excerpt from the article:

So, to wrap up this way-too-long-for-Web-attention-spans essay, here is the good news in our very real and sobering predicament: Easy is not going to be easy any longer. Our culture's addiction to ease is unsustainable. A core Christian conviction—one that informed much of the best of Western civilization—is that the good life is not easy. It requires discipline. It invites us into pain. It makes of us ascetics—not people who shun all earthly joys, but people who choose to limit our appetite for ease so that we might actually know true joy.

Yesterday I started reading Deep Economy, by Bill McKibben. This too is helping to shape my thoughts. I don't believe that this economic crisis is new. It's just a new reality for some of us. It's been a reality for many in our country and throughout our world for a long time. Now that it's filtering up to the middle and upper class, though, it's considered a crisis. We've all heard the stat that half the world's population (over 2 billion people) live on less than $2/day. That is a crisis. The staggering infant mortality rate in my city is a crisis. The fact that in 2007, the poverty rate in this country was lower than it was in 1959, is a crisis. The list could go on and on.

Now that the crisis is affecting much more of our population, I believe that we will be forced to make changes that will not only make our lives better in the long run, but will also help to make the lives of others better.

This gives me hope!
Posted by Robert at 9:24 AM No comments:

This would be so good!

The Tigers could soon be playing both UNC and Duke in basketball. Here's the story.
Posted by Robert at 10:26 AM No comments:

You gotta love this picture 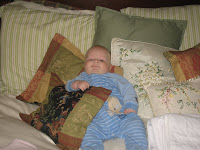 Posted by Robert at 9:55 AM No comments: 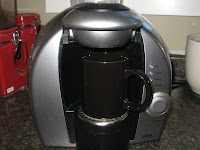 Two years ago Mandy, Adam and I took a trip to New England. Our last stop was Boston, where we spent two nights with Kerry and Kevin. Kerry was Mandy's best friend in high school. One of the highlights of the trip (and there were many) was discovering the Tassimo. Kerry and Kevin had recently gotten one, and they shared their delightful coffee with me. I was immediately taken with this wonderful little machine, and felt that I too needed a Tassimo.

After a few days the need wore off. After all, I already had a coffee maker and an espresso maker. I really didn't need anything else. And that was the end of that. Actually one year later, I incorporated this story into the first sermon that I preached at our church. It was a sermon on the Advent Conspiracy, and I was illustrating the need to fight consumerism. As silly as it might sound, I felt pretty good about myself. I often succumb to consumerism, especially when it comes to tasty gadgets such as this one.

You've probably already figured out that the story didn't end there. A few weeks ago Mandy and the boys went to Paducah to see the grandparents. One day Mandy and Micah went to St. Louis, where Kerry and Kevin now live. At some point Mandy told Kerry about me preaching about the Tassimo. She thought that was really funny, then said, "You know, that thing is packed away in a box. Do you think Robert would like to have it?" Mandy's response: "Oh yeah!"

That night Mandy called me to say that she had a surprise for me, and the next day when they came home, she carried with her the Tassimo. I was definitely surprised, but thrilled. I promptly ordered some coffee pods off Ebay, and it's been bliss ever since.

So...I know that God shows his love for me in ways much more meaningful than this one, but I have to say that this is pretty good lovin.
Posted by Robert at 9:34 AM 2 comments:

Posted by Robert at 6:05 PM No comments:

Jack is our five year old dog, and no, he's not dead. He's just gone to live with Aunt Megan. Two weeks ago Mandy called me and asked what I though about giving him away to Megan. It caught me a little off guard, but my first response was that I thought it was a good idea. She was thinking about getting a dog, and if we were going to at some point give him away, we couldn't find a better home than with Megan.

Those of you knew us when we first got Jack know that he was the first baby. After Adam was born things went downhill a bit for Jack. And now with Micah a part of our household, Jack was only getting leftovers when it came to our love and attention. Megan came to pick him up last week, and since then, there have been a few moments when I have really missed him. I wasn't sure if that would be the case. I'm really glad, though, that he's with family. We'll get to see him from time to time, and he'll probably spend an occasional weekend with us.

So here are a few pictures of Jack Dog (by the way, "Jack Dog" is the name that was given to him by Adam). 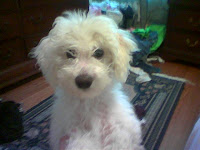 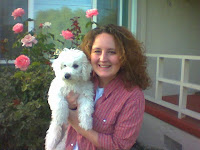 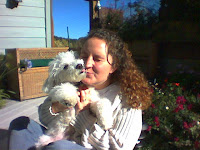 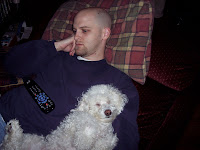 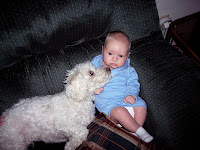 Posted by Robert at 5:35 PM No comments:

I received my first study Bible as a high school graduation gift from my grandparents. That was fifteen years ago (wow, that's a long time ago!). It was a NIV Life Application Bible. I remember that when I first received that Bible I had such a hunger for God's Word. It had a great concordance, lots of charts and maps, and notes at the bottom of each page. It's quite marked up now, but I still use it, and it serves as a reminder of how precious Scripture is, and how grateful I am to have been taught Scripture.

It's now fifteen years later, and our church uses the English Standard Version (ESV). A few weeks ago I ordered the new ESV Study Bible, and yesterday I received it in the mail. I have been excited to get it, but I have to say that it has already exceeded my expectatations. It definitely becomes my answer to the question, "If you were stranded on a deserted island and could have one book, what would it be?" To top it off, I just realized that by purchasing this Bible, I get free access to the online edition. It's excellent. You can check it out for free by going to the website. I'm recommending this to everyone in our church.

I don't feel good today. I have that darn cold that has been going around. I'm lying in bed, but I don't want to sleep, and I have a lot of work to do. So I'm catching up on some reading online. I've focused my reading on the economic crisis that is affecting not only our country, but the whole world. I don't believe that this is the end of the world, but I do believe that it is a very big deal. I've felt for awhile that the decisions that are being made throughout our country may not affect me, but they will definitely affect my children and grandchildren, primarily in negative ways. However, in light of the events of the last month or so, I am beginning to believe that our way of life here in America may soon be severely challenged.

I don't think anyone needs to be reminded of the challenges we face: foreclosures, job losses, shrinking retirement accounts, rising healthcare costs, overextended living and record debt, shrinking oil production and rising costs, rising food costs, etc. What does it mean for us as followers of Jesus? Or, as Francis Schaeffer put it, "How then should we live?"

As scary as this time is, I'm also encouraged. There is hope. It doesn't take one long in their study of church history to learn that the church has thrived most when she could depend on God alone. What happens when our resources begin to vanish? Perhaps it's an opportunity for us to think creatively, to imagine new ways of living, and to redefine what it means to have the good life. Perhaps it's an opportunity for the church to speak prophetically during this time of change.
Posted by Robert at 11:17 AM No comments: 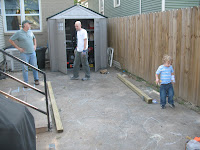 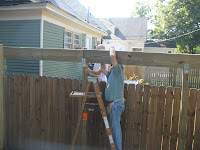 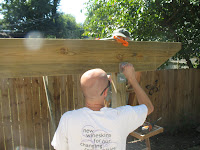 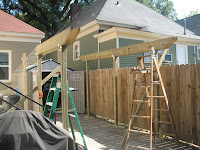 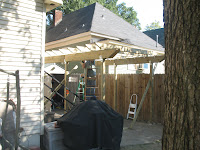 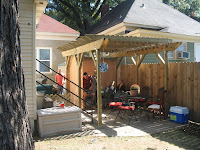 Check Out That Boxscore

I've been hopeful since trading Mike Miller and Kevin Love that OJ Mayo was going to turn into a superstar. The Grizzlies could use one of those, right? Now I know that it's still preseason, but check out these numbers from last night's game:

During his first few preseason games he shot a lot...and missed a lot. But if you look at his shot you have to be impressed (his fade away, in-your-face jumper reminds me a little of Kobe).

My fantasy draft is Thursday night. Will I take a shot on OJ if he's still available in, say, the ninth round???
Posted by Robert at 9:27 AM No comments:

Posted by Robert at 2:32 PM No comments:

I just realized that Mandy took a few pictures at the Cooper-Young Parent's Network kickoff party.

Posted by Robert at 7:44 AM No comments:

Computers: Can't Live with Them...

I am just about ready to throw my laptop out the window. In the last five weeks I've had to reformat my hard drive four times. I finally determined yesterday that something is wrong with the hard drive, so today I'm going to order a new one. It's times like these that remind me just how dependent I am on computers (kinda like foreign oil). I don't know what I would do without a computer, which scares me a little. A friend yesterday suggested the reason I'm having these problems is because I don't have a Mac. I don't like him anymore. A few more of these issues, though, and I may start thinking about making the switch.
Posted by Robert at 7:40 AM 1 comment:

On Sunday night Adam was playing after church and hurt his arm. That night he wouldn't let either of us touch it. I ended up sleeping in his bed with him that night. He woke up on Monday morning and wanted to go to school. We decided to let him go, but told his teachers that he wasn't feeling well. A couple of hours later his teacher called to say that he definitely wasn't himself. Mandy called the doctor and headed to pick up Adam.

I ended up meeting them all at the doctor's office in Bartlett. Adam was very scared, but he did great. The doctor was able to fix his elbow pretty easily, but then was concerned about his wrist. He wanted us to go to another doctor's office, this one in Collierville. So off we went. This doctor did an x-ray to make sure that Adam's wrist wasn't broken.

We were thankful that the x-ray came back negative. The doctor gave Adam a splint to wear for a week or so. He's been doing great wearing it. Another positive that's coming out of it is that Adam hasn't sucked him thumb in several days now because of the splint. 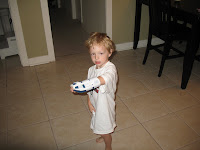 Posted by Robert at 7:25 AM No comments: