One of the more difficult things about going to a conference is that when you get home you have so much to catch up on that you neglect reflection time.  That's been the case with me.  But better late than never, so here goes.

Until last weekend neither Mandy nor I had ever been to New York City.  A few months ago we found out about the City Collective Gathering hosted by Trinity Grace Church, and decided that we needed to go.

We started last Friday morning with a nonstop flight from Memphis to JFK.  It's not everyday that you get an inexpensive nonstop flight out of our city, so we were very pleased by that.  We got to attend a Citywide Worship event that evening.  From what I heard there were around 12 churches there.  It was great heart prep for the Midtown Prayer Collective, which kicked off the day we got back in town.

Saturday morning we rented bikes and rode in Central Park, which was a block away from where we were staying.  Central Park is an awesome place, and one of the highlights was coming to Bethesda Fountain and hearing the beautiful arrangement of Amazing Grace I had ever heard.  I found a video of them (The Boyd Family) singing Ave Maria on Youtube, but just know that the video doesn't do the live performance justice.  The acoustics in this place were amazing.

Here's a picture of the two of us there at Bethesda Fountain. 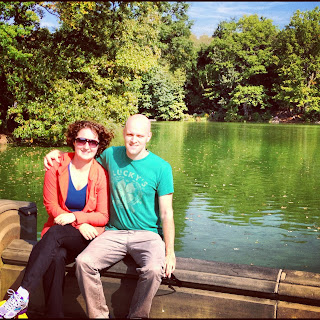 On Saturday afternoon we went to see Ricky Martin in Evita. Actually, Ricky Martin is not the reason we went.  It was my cousin William Waldrop, who is the assistant conductor.  He actually conducted the performance we saw.  Very proud of William!  Later that evening we went to Serendipity.  This one was on Mandy's list, and I have to say she looked extremely cute drinking her frozen hot chocolate! 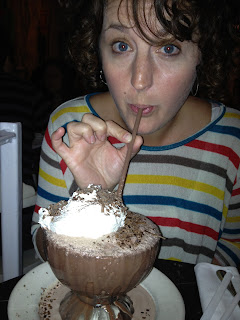 Sunday began with the Highline Park, then Ground Zero, which was very moving.  That evening we went to Trinity Grace's Upper Westside parish, and then the conference kicked off with a rooftop reception at 230 Fifth.  We had an amazing view of the Empire State Building and spent some time with new church planting friends from Detroit.  To top it off, there were red snuggies.  I know it will disappoint you when I say I didn't wear one, but know that I did sit on one. 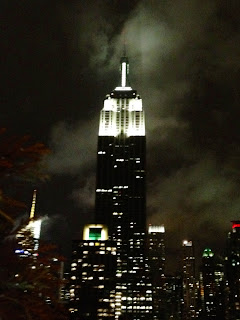 And that brings us to conference highlights, but I'll save that for another post, since this one is getting rather long :)
Posted by Robert at 4:26 PM